Pretty pictures are for postcards 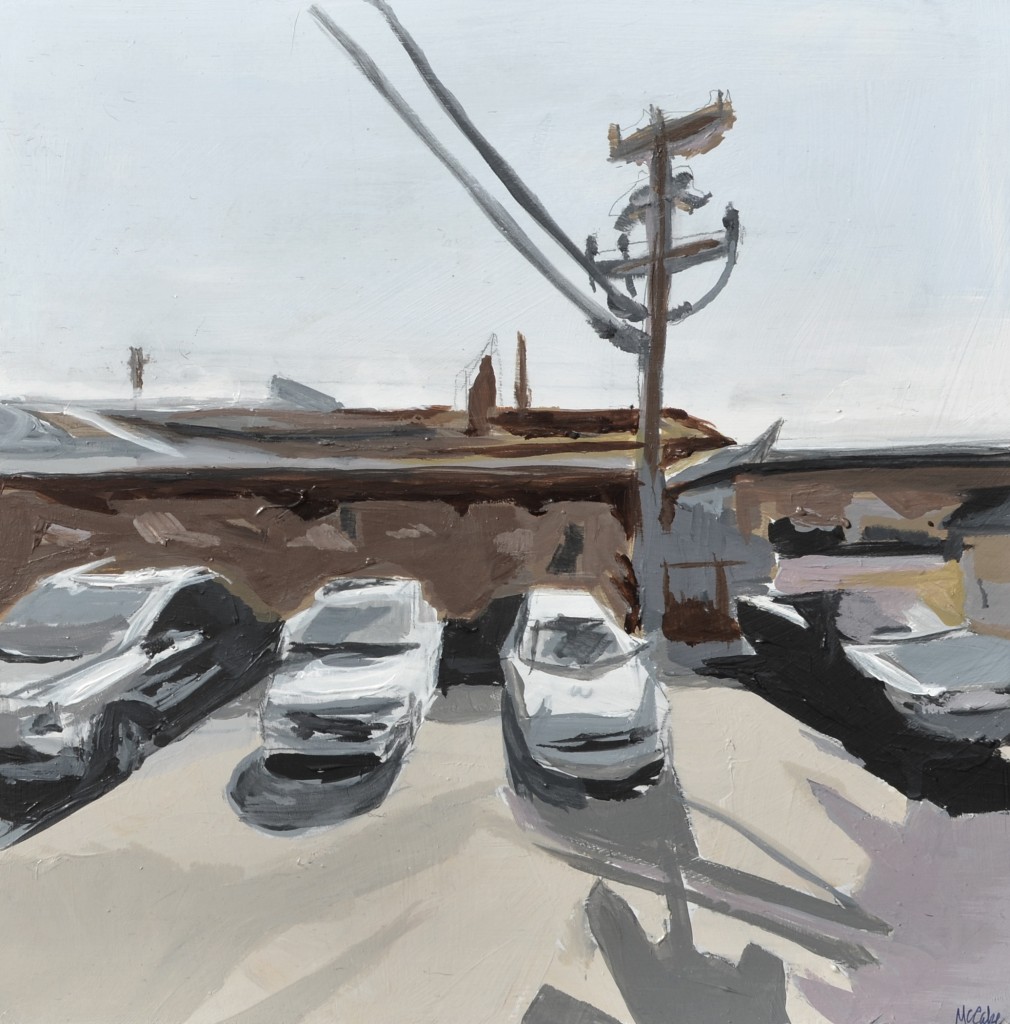 Provincetown affords countless vistas; lilac choked lanes, quaint stores and pristine beaches teeming with wildlife. I rarely paint that. What I gravitate towards is telephone lines and parking lots. Sexy, right? I stride to evoke the feeling of a location and often times that’s better captured by what’s not shown.

I was asked to do a First Thursday opening and display of my last show Casey Was Here at the Coldwell Banker office in Jamaica Plain, MA. If you’re around come on down April 3rd 6-8PM!

Today marks the passing of a typography legend. Mike Parker is arguably the reason behind of the most recognizable font (no offense Times New Roman) in the world. His addition of Helvetica to the Linotype library, and its subsequent proliferation, will ensure that most human being will recognize it for millennia to come. Influential as it is ubiquitous, this font is a default install on your computer, is in myriads of logos and is a go to typeface for maps. It’s no nonsense sans serif face is one of the most legible ever created due to painstaking process involved in character consideration and buildup. Although not the creator of the font itself, that was more of a series of evolution (fontolution? yea, maybe not), he will be forever responsible for you and I knowing what a strange name like Helvetica means. When I’m in the sketching stages of designing a logo and I start a text layout my cursor always produces the characters in its font. Although I ultimately change it quickly there is some sort of odd comfort knowing it’s always there.

Think I’ll view my copy of the documentary  tonight.

I write this looking out at another Nor’Easter pummeling Boston. It’s been a long winter and we are not even close to done yet.

This past Monday I returned from a week of flawless Miami Beach weather. It was my second year attending the same weekend in February due to the Wynwood Art Walk. My impression last year was of surprise. The juxtaposition of cutting edge graffiti against modern art galleries, within a transitional area of downtown Miami, is impressionable. Although some say that it has already been overshadowed as a night out for bar-hopping hipsters, I took away something else.

Galleries attract collectors and artsy types that seek them out. This second weekend of every month event does more than allow an art lover to see many galleries without an appointment, it offers all walks of life a chance to revel and observe. Museums have had that cornered for a long time but you can’t pick up a Warhol, or an unknown struggling artist’s work, if you’re feeling flush. To see so many attendees is a rarity for the art scene up here in Boston. We have Open Studios but it’s is delimited to a different section of the city per month. There are open markets but not the same.This concentration of creative cum entertainment offers a monthly chance to see the works of talented artists of many mediums in a consistent locale. And it goes beyond these second Saturdays. A major event happening over this upcoming President’s Day Weekend is Art Wynwood and it coincides with the International Miami Boat Show. This brings a lot of eyes out to the Midtown, Design District and Wynwood arts scene. All of this exposure and chance to see, or even better, to buy great works is exciting. Miami is getting it right with art world. Boston needs this. So could many other cities for art exposure and for the artists. Granted it helps to have eighty degree evenings. I’m sure we could work something out (I’m looking at you many convention centers of Boston…).

Needless to say, I’m looking for a cheap flight down to Miami this weekend. You should too.

Oh, and I also took in the Peréz Art Museum Miami. I need a whole other blog about that gorgeous palace of awesome.

Exciting. I began my new series Self Portraits.

I just wanted to thank those that came to see and bought paintings from my recent show at James’s Gate in JP. I am flattered by all the feedback and support. I’m in this for the long haul and hope to make your investment in me pay off down the road. I deeply admire all artists that work tirelessly to produce good work. I hope to do the same.

On that note, Happy New Years (say it a little bit crazy for full effect)!

Hey, Internets. So… I’m really new to this selling-myself-as-a-brand thing. I’m told I NEED a blog. Guess I gotta start somewhere if I wanna get some bills paid and sell some arts. I promise to try and write some thought provoking, deeply artsy stuff here as I go, but for now, excuse me as I do a warm up lap and just post a link to an article that was posted (and printed) about my current show Casey Was Here today.

Give it a read if ya got two minutes. Thanks, y’all.